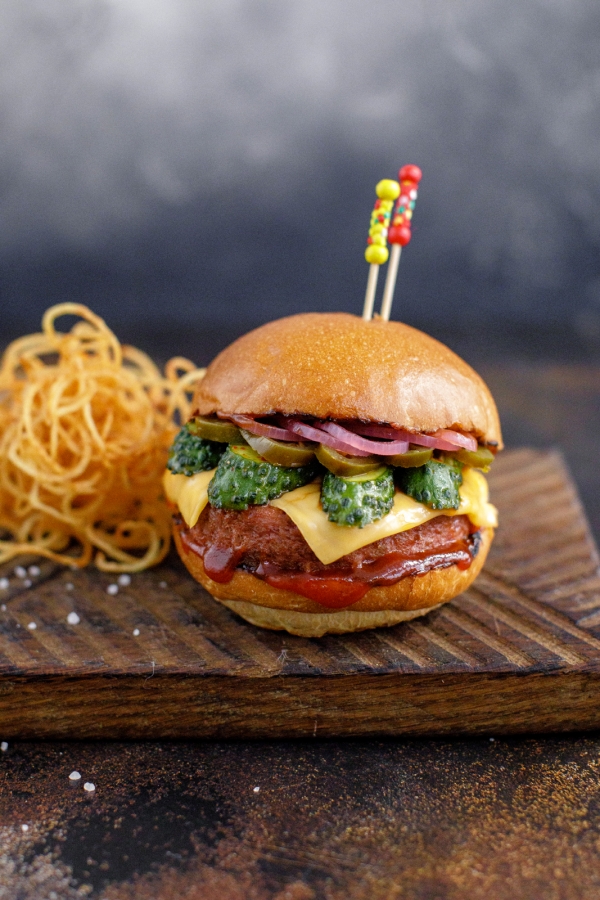 “It’s better one day to be a man than a thousand days to be a shadow,” so says Chinese wisdom.

The White Rabbit Family holding seeks to draw public attention to the global environmental problems facing humanity today. Therefore, in the restaurant menu a burger without beef made from vegetable meat has appeared - an innovative product and a solution to the problem of lack of resources, climate crisis, as well as the possibility of humanizing attitudes towards animals.

The "sinless" burger is made from Beyond Meat vegetable meat, consisting of pea protein, water and oil, which means it is 100% vegan. The consistency, smell, taste and color of this meat is almost impossible to distinguish from the usual meat.

A team of 40 scientists, chefs, molecular biologists and plant physiologists worked on the formula of organic meat at the Science and Technology Center - the Manhattan Beach Project in California. For more than seven years they have worked to make the new meat as similar as possible to the regular. The assembly method is similar to the process used to make pasta: the ingredients are mixed, the mixture is pressed, and then formed into the final product. Cholesterol became the only ingredient of animal meat that was impossible to synthesize from plants, so it is not present in the organic burger, which means that the amazing taste is now combined with absolute benefits for health.

Try the #SinlessBurger with well-known beaten cucumbers in Zodiac starting from today!

Back to events
Thanks!
Your message will be reviewed soon.
Redirecting to the previous page...